Man Claims To Have World's Largest Penis, Releases 'It's Too Big,' Song on iTunes. 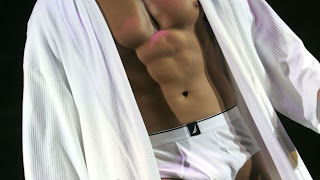 Jonah Falcon claims he has the biggest penis in the world. To be exact, 13.5 inches.

Falcon released “It’s Too Big” on iTunes and CDbaby.com and already the song is winning the love of pop fans, the Huffington Post is reporting.

The lyrics to the catchy tune describe how Falcon’s penis affects other areas of his life, like his romantic side.

“I heard it from all the guys and every single freakin' girl/They wanna try and take a ride on the biggest in the world," Falcon sings before the chorus, "Too damn big/It's just too damn big/Your penis too damn big yeah/It's too damn big."

Still, when asked by reporters if the song is based on his, ugh package, Falcon kept mum and his former porn-star publicist Gina Rodriguez told the press “there will be no interview.”