Indian Creates First Ever Smartphone For The Blind. 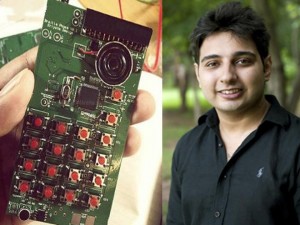 For the first time ever, a team of researchers in India have created a Smartphone prototype for the visually impaired people. It took about three years for the innovators to create this masterpiece which converts all the texts into the Braille patterns. This new invention would enable and help the blind people to read SMSes and even emails on the phone, reports Times Of India.

Sumit Dagar, innovator of this first of its kind Smartphone was very pleased with its success has told, “We have created the world’s first Braille smartphone, this product is based on an innovative ‘touch screen’ which is capable of elevating and depressing the contents it receives to transform them into ‘touchable’ patterns.” He also added, “The response during the test has been immense. It comes out as a companion more than a phone to the user. We plan to do more advanced versions of the phone in the future.”

The innovative Smartphone would use Shape Memory Alloy Technology; it is based on the concept that metal should retain its original shape after its expansion and contraction. The grid has a Braille display making the phone’s screen with grid pins which represents a character or letter. So when the user receives an incoming text the little pins elevates or depress and gets auto translated in Braille, thereby enabling the visually impaired people to understand the text message.

Earlier, there was no actual Braille interface available on Smartphones. There were a couple of cool apps which did impressive things like reading the text loud, determine the denomination of currency and others which in turn made Braille unnecessary for some tasks.

However, it is not clear on what operating system the phone would run on, which the inventors should decide on. The company is currently being incubated at the Centre for Innovation Incubation and Entrepreneurship, located in IIM Ahmedabad campus.

The team led by Sumit Dagar, expects to launch this new innovative Smartphone by end of 2013 and may put a price tag around 10,000 or as per Indian market conditions...