Drama unfolds once more for the famous couple as rumors circulate of Rihanna hooking up with funnyman Dane Cook.

It's not the first time rumors of cheating has plagued Rihanna and Chris Brown, but now it's Cook's name being dragged into the melee. The comedian is said to be long-time friends with Rihanna, but things heated up after the singer attended one of his shows at an L.A. comedy club. 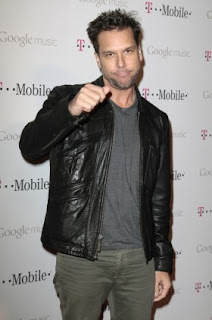 A source reveals more to the rumors to National Enquirer, saying the Stay singer is keeping coy but those close to her can notice the budding friendship.

"They flirt like crazy, and Dane regularly sends Rihanna flowers and gushy emails," the source says. "Rihanna's friends all think they're carrying on a romance, but she's very secretive about it. She wants to keep everyone guessing, including Chris."

Reports say the fairer half of the volatile pair is determined to prove to Chris Brown that just because they're back together doesn't mean he can rest on his laurels. The Stay singer is young and beautiful, and she's eager to show her beau that he's not the only one who wants her and she's still a "hot commodity".

But Rihanna's camp makes it clear in an MTV UK interview that the rumors are simply a fabrication. A representative for the Barbados beauty states the stories linking Rihanna and Cook are "completely untrue".

Sure enough, recent interviews with both Rihanna and Brown indicate a content-if not perfect-relationship.

"We value each other," the bombshell shares to Rolling Stone magazine. "We know exactly what we have now and we don't want to lose that."

The couple is even reportedly planning an extravagant wedding in Barbados set later this year.....