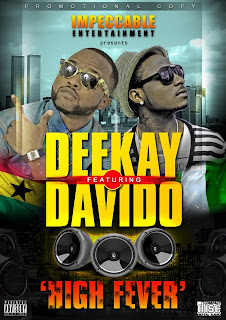 Nigerian artiste Davido was in Ghana in the evening of Tuesday March 5, 2013 to take care of some personal business. He however jetted back to Lagos the next day.

The ‘Ekuro’ and ‘Gobe’ singer was at the Chris Brown concert held at the Accra Sports Stadium. He tweeted the night away, showing a lot of support to fellow Nigerian act Wizkid, who made a surprise stage appearance with headline act Chris Brown.

Davido was among a good number of non Ghanaians who had come for the concert, a list that also included Nigerian singer J Martins.

Prior to the concert, he announced the signing of a virtually unknown Ghanaian artiste Dennis King (otherwise known as DeeKay), to his label HKN. Deekay would join Sina Rambo and B Red at HKN. Both Davido and Deekay had previously worked on a single ‘High Fever’, which got some attention in Nigeria..