Could There Be Trouble In Paradise For Kim Kardashian And Kanye West. 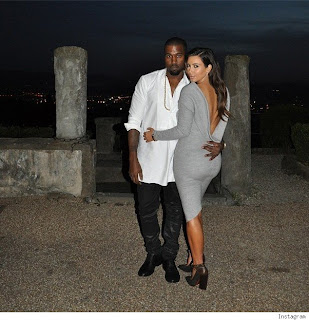 While everything may look fine for the expectant parents, who recently posed for a racy photo shoot together, there are whispers that Kanye is slowly starting to pull away.

"His passion for Kim has cooled," a source said. "This is a man who was once so infatuated with Kim that he would do anything to win her love. Now he's trying to get away from her, despite the fact that they're having a baby."

The couple's differences might just be getting the better of them.

For example, Kanye isn't crazy about his personal life being in the spotlight. He was hesitant to appear on Keeping Up With the Kardashians and made it clear that he wanted Kim to distance herself from reality TV altogether.

Unfortunately, the E! star is showing no signs of slowing up or stepping away from the multi-million dollar television empire that revolves around the everyday goings-on of her family.

Speaking of being in the spotlight, Kim apparently arranges all kinds of photo ops that make Kanye really uncomfortable. In fact, for their recent L'Oficiel Hommes cover, Kanye didn't even show his face.

In many of the other "candid" paparazzi photos, Kim is beaming and seems to be enjoying the spotlight while Kanye appears visibly uncomfortable and never even cracks a smile.

While it could just be a bunch of over-analyzing, it seems that we aren't the only ones who have noticed it. The source close to the family revealed that Kanye's recent frigidness is "making Kim very nervous."

They also said that becoming a single mom would be Kim's "worst nightmare"...and while we can't say we blame her, Kim is fortunate for the fact that she has a good family around her, so she's always going to have some sort of support system no matter what.

What do you think? Does it seem like Kim and Kanye are on the rocks????..