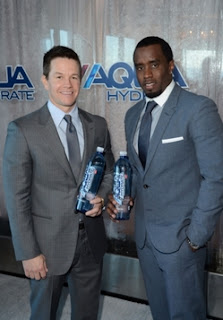 Miami resident Sean"Diddy" Combs (that's apparently his serious business name) and Mark Wahlberg (who has long since stopped referring to himself as Marky Mark), have partnered to sell water.

But wait, folks! It's not just water -- it's a "revolutionary new performance water" set to "take over the beverage industry," according to a news release.

AQUAHydrate has actually been around for more than a year, with mixed results.

Now, it has turned to celebrities to peddle the product. Don't snicker -- Jennifer Aniston is successfully shilling for SmartWater.

Even though Combs and Wahlberg are actual partners in the company and will "oversee business strategy," the company has a real water mogul behind the desk. AQUAHydrate's CEO is John Cochran, the former president of Fiji Water.

So what is AQUAHydrate? It's water that's been filtered and then pumped up with a proprietary blend of 72 electrolytes and trace minerals called ConcenTrace...