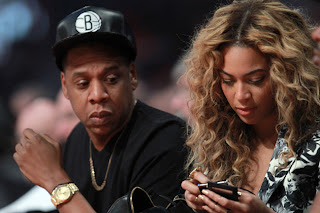 Beyonce and Jay-Z may have dirty money (and not in the Diddy sense) on their hands — but it’s not their fault. The power couple were reportedly paid $1 million for an appearance in Nigeria by a local governor … and the governor may have used poverty funds to pay their fee.

The appearance was back in 2006, when Gov. Goodluck Jonathan (what an awesome name) held the post. About 150 naira (equal to about $1 million) were used from a poverty alleviation fund to pay for Hov and Bey’s performances at the country’s ThisDay Music Festival in Lagos.

Sahara Reporters printed a copy of the duo’s contract and reported that sources said there’s “a shady financial link” between high-profile promoters and the state and federal officials in Nigeria. Bayelsa state officials signed the document. Nduka Obaigbena, who owns ThisDay, a popular Nigerian newspaper, often sponsors events, but with government funding.

“Mr. Obaigbena often lines up financial bonanzas from numerous governors, ministers and other top government officials to finance his jamborees,” a source said.

Sahara Reporters nabbed a letter from Obaigbena to the Bayelsa State government requesting funding for Nigeria’s 46th independence celebrations in 2006. He wrote, “We invite you to partner with us as co-hosts of the festival … with a total budget of $10 million, the co-host is expected to contribute a minimum of $2.5 million (two million five hundred thousand USD).”

He added, “The stars’ performances would “tell the world, through music, that Nigeria’s time has come. And once the good news catches on with the young and upwardly mobile, music loving new generation it will catch on with the world of investments and bountiful opportunities.”

The bottom of the letter has notes from Jonathan as well as the Bayelsa State accountant general: “Release N150,000,000.00 (One hundred and fifty million naira) only to be drawn from the poverty alleviation subhead.”

What makes this particularly sad? The report says that 47 percent of Bayelsa residents live in poverty. The report notes that Beyonce and Jay-Z likely have no idea where their paycheck came from and doesn’t list them as at fault in the scandal — which broke when investigators began looking into Kim Kardashian‘s recent $500,000 payday for visiting the country. Other stars who’ve visited the country for premium prices — and whose ticket prices are out of reach for most residents — include Usher, R. Kelly and Rihanna....