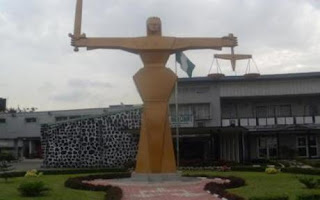 A businessman, Mr. James Onyike, on Monday sued his wife, Patricia, a nurse, for allegedly abandoning him and their children since 2008.

Onyike told a Cusomary Court in Garki, Abuja, that “my wife secured a one-year admission for further studies in the United Kingdom (UK).I paid the tuition and accommodation fees for the programme on the understanding that she would return after one year.

“But on expiration of the programme, my wife decided to stay back and enroll for another programme.On completion of her second course, she refused to come back to Nigeria. I continued to beg her to return, but she refused. Till date, she is still in London. She has practically abandoned me and the children,’’ he said.

He said his wife was abusive and conducted herself in a manner unexpected of a married woman.

“When I visited her in London, she was so hostile to me and the children. She never cared for the children as a mother would.When I told her to try spending a little time with the children, she told me that she does not have time and that I should look after them.

“She kept avoiding me all through our stay, we never related like husband and wife should. In fact, she even threw me out of her room,’’ Onyike told the court.

Onyike said that the love, affection and trust expected to exist between couples evaporated almost immediately after the wedding.

“On our wedding day, my wife’s real father showed up, but my wife had lied to me that her father was dead. She made me pay the bride price to someone whom she said was her brother.

“Even when she visited Nigeria in 2010, though we stayed under the same roof, she was always keeping to herself.She was no longer exhibiting that motherly love and affection,’’ he said.

Onyike prayed the court to dissolve the marriage, grant him custody of the children and restrain his wife from entering his home.

On her part, Patricia, who was represented by a counsel, Mrs.Timitope Joshua, said they had enjoyed love and affection for each other.

“There was never any serious quarrel between us; he even encouraged me to travel for further studies. When I finished the first course, he visited UK and encouraged me to enroll for another course, which he said would make me a better qualified nurse,’’ she said.

She said that her husband and the children always visited her in London on every vacation, adding that “whenever they could not make it, I visit. I have never been hostile in any of their visits. I try my best to take good care of them and we stay together happily until the vacation is over. So, I am surprised to hear that my husband has leveled accusations against me,’’ she said.

Patricia said her husband never informed her that he was no longer comfortable with her studies in the UK, adding that she still loved her husband and her two children.

She also said that the marriage had not broken down irretrievably and could be redeemed in the interest of the children even as she begged the court not to grant her husband’s prayers, adding that she was still interested in the marriage.

The Judge, Alhaji Suleiman Ismaila, gave them four weeks to try and reconcile and adjourned the case to March 7...