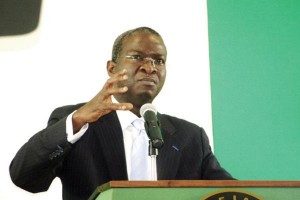 Governor Fashola, who spoke at the Lagos House, Alausa, while playing host to the new British Deputy High Commissioner in Lagos, Peter Carter, noted that the existing alliance between Nigeria and Britain has been mutually beneficial but added that there was need to explore other areas of engagement.

He told the Deputy High Commissioner: “I personally think that our alliance with your country has been quite mutually beneficial and it is something that we should do more. There are many areas that we are still engaging and there are many other frontiers to explore”.

According to the governor, “The character of the Lagos Economy itself is still very dynamic. New frontiers are still opening, frontiers that will, most certainly, engage the interest of the British Government and that of British entrepreneurs”.

One of the ways to increase and improve on the existing relations and cooperation, the governor said, is by reviving the half-yearly meetings between the Deputy High Commission in Lagos and the State Government, pointing out that it would provide the best platform to talk in more details on issues that would create greater opportunities for the people on both sides.

Pointing out that the state government is at the moment focusing on Power, Agriculture, Transportation and Housing, Governor Fashola expressed gratitude to the British Government for the support it has continued to render to the state through its Department For International Development (DFID), especially in the areas of public lighting, healthcare, education and others.

“The list is endless but we continue to receive these reports. But, as I told the Prime Minister when he visited, we only expect that the DFID’s pockets and envelops will be larger and deeper, but wherever they have impacted, we have seen progress,” the governor said.

He recalled that some of the things he discussed with the Prime Minister were centred on healthcare, especially, vaccines for the cure of some of the health issues still prevalent in the country adding, “One of the issues I raised with him is why not manufacture the vaccines here instead of them being shipped from Britain”.

Earlier, in his opening remarks, the Deputy High Commissioner said he was at the Lagos House to express his appreciation of the commitment of the Governor to reformation and transformation in Lagos, adding that the commitment has made tremendous impact on the Nigerian Economy.

Describing Lagos as the engine room of the Nigerian Economy, the Deputy High Commissioner declared, “Lagos is fundamental to the economic well-being and growth of Nigeria”, noting that Nigeria has a historical link with Britain spanning many years and including both economic and cultural links.

“Before I arrived Nigeria, the United Kingdom has a unique relationship with Nigeria. Aside economic link, we also have cultural link. Many Nigerians have made the UK their homes where they reside, work and raise families while Nigeria remains their ancestral home,” he said.

He said part of his brief in Nigeria was to revive and increase the relationship between Nigeria and Britain, pointing out that in the past this relationship had largely been taken for granted....