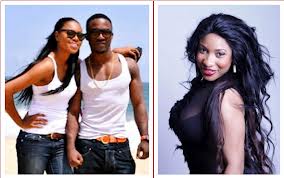 According to sources, the two have been secretly romancing each other for quite some time now. But this time they are planning to make it public.

Close sources to the actress have said Tontoh has been displaying her man on her BlackBerry status and also posting and re-tweeting pictures of him on social network twitter.

The award-winning actress and reigning musician are yet to speak about their secret love affair.

Inyanya is currently hot in Nigeria while Tontoh is not just hot too, but also controversial. She was last in the news for saying Mercy Johnson and Van Vicker were not her friends.

Tonto allegedly had a messy fight with star actress Mercy Johnson and Van Vicker last year and since then things have not been cool between them.

She claimed Mercy Johnson was not her type and said she had let go of everything that transpired between them......