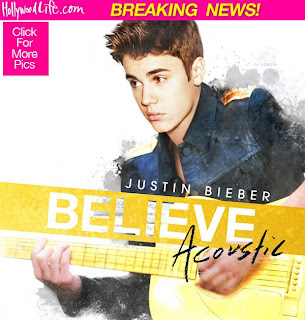 Justin tweeted on Dec. 28 that in addition to the original eight tracks on his upcoming ‘Believe’ acoustic album, he wrote and added two more at the last minute — do YOU think they are about his relationship drama with Selena?

Justin Bieber‘s acoustic version of Believe is set to drop January 29, and now there are two more tracks that have been added. “8 wasnt enough. had to write some more new ones. now im putting out 10 SONGS on #BELIEVEacoustic. Im telling u.”


Justin’s manager Scooter Braun confirmed, tweeting on Dec. 28, “for those asking yes @justinbieber played guitar on the acoustic album. and yes there r now 10 song not 8 because he wrote 2 new ones 2nite”

He added, “no BS when i say we are all really happy with how #BELIEVEacoustic turned out as it all sounds new and organic. Think u will all love it”

Justin first teased the album on Dec. 21, tweeting, "Merry Christmas time. u can PREORDER :) spread the word. thanks #BELIEVEacoustic.”

Scooter also tweeted on Dec. 21, “the #BELIEVEacoustic is up for preorder. the tone and sound of this album is special. the new song is amazing. enjoy.”

2. As Long As You Love Me (Acoustic Version)

3. Beauty And A Beat (Acoustic Version)

7. All Around The World (Acoustic Version)

Justin will reportedly release a 3D concert movie in 2013 as well, so next year might be the most exciting year for the Biebs!

Are you going to buy the album, People? Do you think the three new songs will be about Selena Gomez?