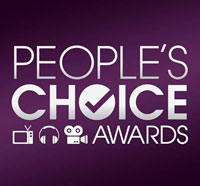 And the first awards show news of the season has arrived with the announcement of the nominees for the 2013 People's Choice Awards. Once again, horror got the cold shoulder in films, but lots of our TV favorites are here. Check out the highlights!

In the film categories you'll find Jennifer Lawrence/Josh Hutcherson/Liam Hemsworth and The Hunger Games, Kristen Stewart/Chris Hemsworth and Snow White and the Huntsman, the Twihards and the Tributes in the "Favorite Movie Fan Following" category, and Dark Shadows among the "Favorite Comedic Movies"; but TV is really where the horror can be found.

Favourite Network TV Drama:
"Grimm"
"Once Upon a Time"

Favourite Sci-Fi/Fantasy TV Show:
"Doctor Who"
"Once Upon a Time"
"Supernatural"
"The Vampire Diaries"
"The Walking Dead"

· Website - PeoplesChoice.com houses the main voting platform for PEOPLE'S CHOICE AWARDS 2013. Click around to all of the different categories and make sure you vote, vote, vote!

· Facebook - If you can’t make it all the way over to PeoplesChoice.com, head to Facebook.com/PeoplesChoice and vote right there. Fans can personalize their page, share votes with their friends, and even RSVP to the People’s Choice Awards.

· Twitter - Like the last few years, voting is enabled on Twitter. It’s super simple and a great way to show support for your favorites in movies, music, and TV: After voting on the Web or Facebook, you’ll be asked to “Tweet your vote.” Once you choose that option, you will automatically cast a second vote through your Twitter account. Best of all, retweets count too! Keep track at @PeoplesChoice.