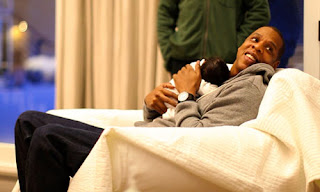 Jay Z and Beyoncé have lost a bid to trademark the name of their daughter, Blue Ivy. The musicians' petition was denied by the US patent and trademark office, permitting an American wedding planner to continue using the name.

"Money doesn't buy everything," Veronica Alexander told Rolling Stone. Until recently, Alexander had been in danger of losing the rights to the name of her own business: although Blue Ivy Events was founded in 2009, Jay-Z and Beyoncé were seeking to reserve the phrase "Blue Ivy" as a brand name for their own line of baby products. The couple's first daughter, Blue Ivy Carter, was born on 7 January 2012.

Alexander responded to Jay-Z and Beyoncé's trademark claim by submitting her own application. The trademark office has now authorised her to continue using the Blue Ivy name for her events company, while the hip-hop power couple can allegedly use the name for other kinds of businesses. "If this [hadn't worked], I'd go after both of them," Alexander said. "There's no way by way of being a celebrity they should have entitlement [to the name]. Shame on them."

Alexander recalled being surprised when she learned about the name of the little girl: "Nobody names their daughter Blue Ivy," she said. But their decision – and the controversy – has been good for her business. Besides, should the couple be unsatisfied, the 32-year-old told the Telegraph there's an easy solution.