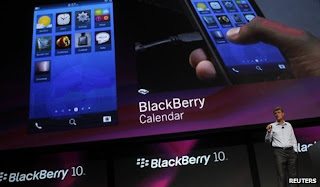 He took over in January, after Mr Lazaridis and his co-CEO Jim Balsillie stepped down, battered by the crisis at the Blackberry company which probably explained the tensions of our interview the previous spring.

With its share of the smartphone market heading south and investors agitated about the precipitous fall in the share price, Mr Heins faced an unenviable challenge. When he was asked how much progress he made, he took  through a list of management changes and restructuring initiatives.

But he knows his real challenge is to turn around perceptions of Blackberry.

Last week the New York Times ran a feature which could hardly have been more damaging, suggesting that Blackberry owners were now ashamed of their devices. In the city where every Wall Street banker and hotshot lawyer once flaunted this symbol of their need to be connected to their email 24/7, this was hurtful stuff.

When I brought up the article, Mr Heins insisted it was poorly researched and far from the truth: "80 million users that are loyal is a different testament."

But as if to highlight the huge problem that Blackberry has in the United States, he went on: "What I see in my markets outside the US is huge growth, huge commitment to Blackberry."

But there appears to be no growth and no commitment in the US - indeed, figures show that RIM's smartphone market share keeps on falling, down another 3% between May and August this year.

Blackberry is still a very respected brand across the developing world - but it is undeniable that it has lost its cachet in the US and Europe. Turning that around and pulling the company out of its death spiral all depends on a new operating system, Blackberry 10.

Mr Heins gave a demo, saying that this was a "whole new paradigm" in mobile operating systems. Unlike the pattern set by Apple's first iPhone, where a user has to continually go in and out of a menu of apps, Blackberry 10's trick is something called Flow. This enables you to move seamlessly between a whole range of apps, heading from an email to your calendar to a social network without returning to a home screen.

The key difference, though, is that RIM has finally surrendered fully to the touchscreen experience, having insisted for years that a physical keyboard was integral to its appeal. There will still be devices with keys to tap but Mr Heins indicated that the buttonless Blackberry was the future.

The CEO and his executive team have been travelling the globe spreading the gospel of Blackberry 10 to developers - who will provide the apps on which its appeal depends - and the mobile operators who will sell it to consumers. He said there had been plenty of support.

But here's the rub - the new system won't be available until the first quarter of next year, and that may be too late. With every passing week, more consumers choose Android or Apple phones, and even more crucially, more corporations switch away from Blackberry. The management consultants Booz Allen and US Customs are amongst the recent deserters. Winning them back will be a lot harder than losing them.

But Mr Heins remained resolutely cheery. "Quality matters," he insisted when it was suggested RIM had already missed the boat. "We're not just building an update of Blackberry 7, we're building a whole new mobile computing platform. Don't underestimate the dynamic that this platform is going to create in the market." And he made this bold claim: "In the US we are going to regain our market share with Blackberry 10."

With Android and Apple now grabbing most of that market, the road back looks hard - and that is if you ignore the much better-funded Windows Phone platform. I know plenty of people who are anything but ashamed to own a Blackberry......

But a brand that has been left behind in a fast-changing world has only a short time to turn things around......