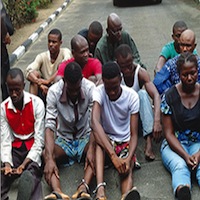 The Rivers police command on Wednesday arraigned 13 suspects before a Port Harcourt Magistrate’s Court and charged them with conspiracy and murder of four students of the University of Port Harcourt.
The suspects were arraigned on a five-count charge of murder, felony, conspiracy, lynching, and burning.

The magistrate ordered that the accused be remanded in police custody for further investigation, and adjourned the case till December 20, for further hearing.......