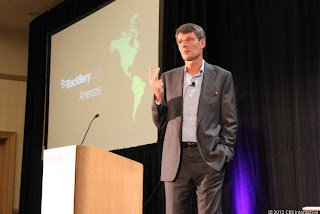 BlackBerry maker Research in Motion has revealed it lost $235m in the past quarter.

In the three months to September 1, the Canadian-based firm posted its third consecutive loss.

But the hit was not as bad as analysts had forecast and the market responded positively in after-hours trading.

The company has been under the spotlight in recent years as it struggled to keep pace in the fast-changing smartphone market.

The loss translated to 27 cents (0.16) a share excluding special items, which was not as bad as Wall Street estimates of a loss of 46 cents (0.28) per share.

RIM shares, which have slumped to historical lows, rallied around 18% in the after-hours trade.

"Despite the significant changes we are implementing across the organisation, our second quarter results demonstrate that RIM is progressing on its financial and operational commitments during this major transition," RIM president and chief executive Thorsten Heins said.

Mr Heins said the BlackBerry 10 platform, which aims to revamp the smartphone to compete with the likes of Apple's iPhone and Google-based Android devices, "is on track to launch in the first calendar quarter of 2013".

BlackBerry 10 had been set to launch in late 2012, but Ontario-based RIM announced a delay earlier this year that prompted grim predictions for the company.

It said revenues in the fiscal second quarter rose 2% from the prior quarter to $2.9bn (1.78bn), a figure some 31% lower than a year earlier.

The company's global subscriber base rose to 80 million and the company's cash position edged up to $2.3bn (1.41bn).

RIM's result statement warned "that there will be continued pressure on operating results for the remainder of the fiscal year based on the increasing competitive environment, lower handset volumes, increased marketing expense associated with the launch of BlackBerry 10".

The company is also planning a campaign "to aggressively drive sales of BlackBerry 7" before the launch of the BlackBerry 10 smartphones.

As a result it expects an operating loss in the third quarter of the accounting year..