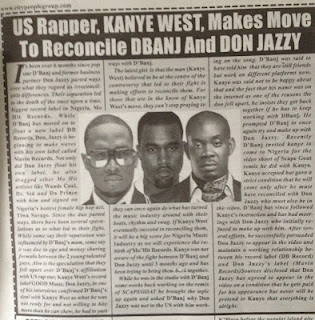 DB Records owner and pop artiste D’Banj is desperately trying to reconcile with his former Mo’ Hits partner Don Jazzy. In a bid to get his former maverick producer back, D’Banj asked Kanye West to talk to Don Jazzy. A few months ago the rap superstar called Don Jazzy to try and get the two Mo’ Hits owners to forget the past and work again.

According to the City People magazine, “Kanye West, believed to be at the center of the controversy that led to their fight is making efforts to reconcile them…Kanye West was not aware of the fight between D’Banj and Don Jazzy until 3 months ago and has been trying to get them together.”

The City People story goes on to say that “while he was in the studio with D’Banj some weeks back working on the remix of “Scapegoat” he brought the topic up again and asked D’banj why Don Jazzy was not in the US with him working on the song. D’Banj was said to have told him that they are still friends but work on different platforms now. Kanye was said not to be happy about the fact that his name was in the internet as one of the reasons the duo fell apart. He insists they get back together if he has to keep working with D’banj. He prompted D’Banj to once again try and make up with Don Jazzy.

“Recently D’Banj invited Kanye West to come to Nigeria for the video shoot of “Scape Goat” remix he did with Kanye. Kanye accepted but gave a strict condition that he will come only after he must have reconciled with Don Jazzy who must also be in the video.”

According to the City People story, after several attempts by D’Banj, Don Jazzy agreed to appear in the video on a condition that he gets paid for his appearance....Hmmmmmm
Posted by Unknown at 13:09